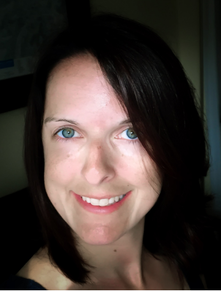 CINDY SMALLETZ, M.S., M.A., who is Program Director, Narrative Medicine, at the College of Physicians & Surgeons of Columbia University,  was one of the first graduates of the Columbia program. She holds a graduate degree in Instructional Design & Technology from Seton Hall and worked for the Center for New Media Teaching and Learning at the Columbia University Medical Center, focusing on merging technology and education for students and  faculty. By bringing together Narrative Medicine with education and technology, she plans to change healthcare through better training, communication, and empathy.
Click here to learn more about Cindy!
IRIS 2019 Schedule

Cyera Taylor, Salem College
In 2014, Guo and Mu introduced a framework to jointly estimate age, gender, and race by using regression techniques including linear and non-linear canonical corrrelation analysis and partial least squares regression. They considered the feature extraction method of bio-inspired features (BIFs) on Morph-II. This study extends Guos exper iment with the use of different feature extraction methods such as histogram oriented gradients (HOGs) and Local Binary Patterns (LBPs), in addition to BIFs to see which extraction methods are the most effective at jointly estimating age, gender, and race.


James Miller, Wake Forest University
Ethanol exposure produces profound changes in the trafficking and activity of many G-protein coupled receptors (GPCRs) which are associated with alcohol preference, tolerance, and dependence. However, the molecular mechanism involved in ethanol-induced changes in receptor function remains unclear. Our lab previously found that ethanol treatment increases cholesterol content in rat brain, altering membrane lipid composition. Cholesterol enriched in lipid rafts of membrane plays an important role in membrane integrity and promotes the recruitment of signaling molecules. Ethanol-induced disruption of brain cholesterol homeostasis would influence the signaling of many membrane-bound GPCRs and channels. This study aimed to examine whether CIE also cause changes in the membrane localization of G-protein subunits which are tightly associated with many GPCRs and channels.

Maximilian Rezek, Wake Forest University
In the non-Euclidean model of elasticity, growth is modeled by a Riemannian metric that encodes local changes in distance. In response to the growth, the sheet deforms to minimize an elastic energy. The elastic energy consists of the sum of the stretching and bending energy. Minimizers of the stretching energy consist of isometric immersions of the metric, while minimizers of the bending energy remain flat. The competition between bending and stretching selects a pattern in the sheet. In this talk, we will show that periodic patterns have the lowest energy for a large class of metrics. Qualitatively, our results agree with patterns observed in leaves and torn elastic sheets.

Kristen Scheckelhoff and Ayesha Ejaz, UNC Greensboro
Hepatitis C is an infectious liver disease which contributes to an estimated 400,000 deaths each year. The disease is caused by the hepatitis C virus (HCV) and is spread by direct blood contact between infected and susceptible individuals. Despite the magnitude of its impact on human populations, hepatitis C receives relatively little scientific attention. In particular, studies targeting disease eradication in the populations most at risk -- injecting drug users -- are scarce. Here we construct a game-theoretic model to investigate the effect of clean needle use on the spread of HCV. Individual drug users, seeking to maximize their own payoff by weighing the cost of clean equipment against the cost of infection, may opt for a level of protection between 0 and 100%. We find that the spread of HCV in this population can theoretically be eliminated if individuals use sterile equipment approximately two-thirds of the time. Achieving this level of compliance, however, requires that the real and perceived costs of obtaining sterile equipment are essentially zero.

Nicholas Contillo, Wake Forest University
Concussions in American football have acute and long-term health consequences and are known to occur more frequently in games than in practices. Scrimmages are a common drill conducted in practice, are intended to simulate games, and may therefore be a modifiable risk factor for concussions. This study seeks to evaluate the relationship between a football team’s practice structure and the frequency of concussions that occurred during a single season. On-field head impact data were collected from athletes participating on one high school football team using the Head Impact Telemetry (HIT) System during all practices and games. Video was recorded for all sessions, and post-season video analysis was performed to eliminate impacts that occurred when athletes were not helmeted. Video was also used to assign each head impact occurring in practices to a drill type. Drill types were characterized as either tackling, skill, or scrimmage. Tackling drills included: Oklahoma, tackling circuit, small group tackling, and one-on-one. Skill drills included: position-specific drills and special teams. The duration of each drill was determined by one-minute interval checks by a video rater. The date and session type were recorded for all clinically diagnosed concussions. Mixed effects models were used to assess differences in head impact exposure and time spent between session (i.e. practice and game) and drill type on weeks concussions did and did not occur. 7,004 impacts were evaluated over 12 games and 28 practices from 23 football players. Weeks with concussions correlated with significantly more time spent on scrimmaging and less on skill practice drills, with a parallel increase in the frequency of high magnitude impacts during games. Reducing head impact exposure during games is a noble goal, practices are an environment amenable to change; therefore, limiting time spent on scrimmaging while maximizing skill development may reduce concussion rates in high school football.

Susan Rogowski, Wake Forest University
DNA replication begins when local unwound regions of several broken hydrogen bonds form. These regions are often referred to as bubbles and their formation can be modeled using a chain of coupled pendulums. The motions of angular oscillations that occur are usually modeled using the sine-Gordon equation. In this model, the discrete analog of the sine-Gordon equation is derived. Instead of taking the continuous limit, the space step between pendulums remains nonzero and the forces on the pendulum by Newton’s laws of motion are considered. Additionally, the randomization of nitrogen bases, Adenine, Thymine, Guanine, and Cytosine, within the chain of pendulums is modeled by randomly selecting the corresponding coefficients for each base. The system of differential equations is solved and plotted using Verlet integration in MATLAB.

Addie Harrison, Wake Forest University
Animals in motion have the ability to track an object with their vestibular ocular system in order to keep the image stationary on the retina. A motivating example is a chicken’s ability to keep their head stationary despite the forces that are being applied to their body. In our work, we are interested in understanding the mathematics of image formation and image tracking. Using tools from vector calculus, projective geometry and linear algebra, we developed a model that maps images from space to the retina. This model allowed us to create optical flow vector fields that shows the path light takes on the retina. Furthermore, using differential equations, we developed a dynamic 3D model of the head coupled to the eyes which track an object in space. In collaboration with neuroscientists we can use our models to learn how the visual system and the brain are used in conjunction to stabilize an image as well as to process depth perception.

Fernando Rigal, Wake Forest University
Nitrite, which was previously thought to be inert, acts as a storage pool for nitric oxide in the presence of deoxygenated red blood cells (RBCs) and may have potential for treating thrombosis. Fibrin fibers form the backbone of blood clots that are highly responsible for thrombotic conditions, such as Deep Vein Thrombosis. Nitric oxide (NO), as shown by a previous study using ProliNONOATE (5µmol/l), can alter the kinetics of fibrin fiber formation as measured by optical turbidity. The NO modifies the protein thiol residues, resulting in lower fibrin fiber density. Other experiments in our lab suggest that nitrite bioactivation by RBCs involves formation of a surface thiol bond that would be broken by irradiation, releasing NO activity. Thus, we hypothesize that far-red light (FR) potentiates the effects of nitrite. Turbidity measurements of clot formation and clot lysis were performed on plasma samples with or without nitrite (100 µmol) as well as FR light exposure (660 nm) using a microplate reader spectrophotometer. It was found that clots treated with nitrite had a considerably longer lag time prior to clotting (p = 0.006). Furthermore, clots that were treated with nitrite and FR light had a significantly longer lag time than just the nitrite treatment itself (p = 0.04). These results indicate that the NO donor, nitrite, in hypoxic conditions, contains potential value for thrombotic conditions that could be enhanced with FR.

Sydney Sutton-Hyman, Winston Salem State University
Many chemotherapeutic agents have been used to treat breast cancer, with varied outcomes depending on the specific subtype of breast cancer. Our research utilizes a novel basal-like breast tumor (BBT) mouse mammary tumor cell line that mimics human BBT in order to identify improved therapies that are specific for this tumor subtype. This mouse mammary tumor cell line (K14TRT), is BRCA1 and p53 deficient. In this study we investigate the effects of Diallyl disulfide (DADS), a component of garlic, on apoptosis in the K14TRT cell line. It is our hypothesis that DADS, which has been previously shown to induce apoptosis and inhibit proliferation in MCF-7 breast cancer cells, would have a comparable affect in the K14TRT cells. Preliminary results of K14TRT cells treated for 24 h with DADS ranging from 25-75M supports that there is induced apoptosis as demonstrated by microscopically by condensed nuclear chromatin. This apoptotic event appears to be dose dependent as exhibited by trypan blue exclusion, when comparing the DADS treated to the untreated K14TRT cells. DNA fragmentation and caspase-3 assays are currently being conducting to confirm apoptosis induction by DADS. Additionally, our work points to decreased antioxidant capacity being a phenotype of the K14TRT cells, and could hence be a promising therapeutic target. Conclusion. This study provides evidence that DADS does induce apoptosis in this novel p53/BRCA1 deficient cell line, and could possibly be used as a therapeutic approach to targeting this specific subtype of breast cancer.

This conference was possible thanks to the generosity of The Provost Emeritus Fund
​as well as the Student Activity Fee provided by Wake Forest's Office of Student Engagement.